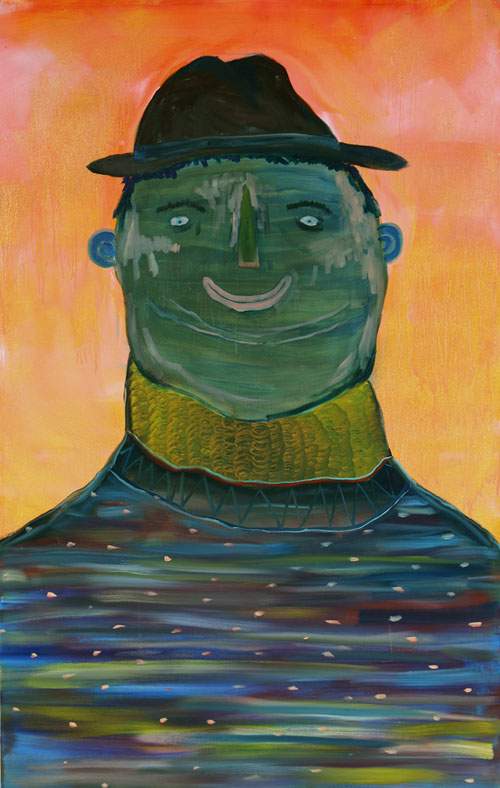 Tom Howse’s paintings, often anchored around a single image, solitary entities which the viewer is forced to confront. Drawing from a scattered range of sources, each painting plays a role or sets a scene within a larger narrative, allowing the viewer to establish their own construction of an overall puzzle. Although each painting holds its image there can also be seen a wider mythology unravelling when viewing the works as a series.

With his vibrant painterly language, Howse expresses a celebratory approach to painting, a vivid and confident vocabulary, incorporating the idiosyncrasies of mistakes and accidents. There is a definite humour and joviality within his works which allures and invites the audience, but sometimes perhaps disconcertingly so. Perhaps like some deceptive fairy-tale villain Howse is leading us, not down the yellow brick road, but perhaps into a haunted forest where we may glimpse the darker underbelly of a more sinister intrigue?

Howse explains that through his practice he is attempting to work through his own thoughts and investigations on the world. “We have a vast selection of theories and models to lend understanding to our lives such as sciences and religions. But essentially each of these versions on explaining our existence is just one angle. There is no reason why we can not manufacture our own theories”. Creating paradigms which are far more personal and therefore meaningful to the individual because they have been formulated as a unique system. Howse refers to his practice as his own form of ritualistic investigation, the act of painting being his source of creation; devising understanding and creating artefacts of a make believe order of magical logic.

The Chester born and London-based artist graduated from Wimbledon College of Art in 2011, following which Howse was invited to take part in Down Stairs’ artist residency program.

He was shortlisted for the Saatchi Gallery and Channel 4’s 2011 New Sensations prize, and will feature in the 2012 Catlin Art Guide. He currently has work on show in London at Zero10, Soho until 10th February, and will be showing in “The Perfect Nude”, a group show curated by Phillip Allen and Dan Coombs at Wimbledon Space also in January 2012.

Alongside the exhibition Down Stairs will show René Laloux’s 1972 animated film Fantastic Planet (Le Planete Sauvage) in it’s screening room. Chosen by the artist to show alongside his work, he describes it as:

“A bizarre science fiction animation with an uncannily, hypnotic atmosphere and a complex relationship between two species with strange meditation rituals. I was thinking about titles for the show, and came up with Fantastic Salad as a play on the title of this film which made me think about it’s themes and aesthetics, the nature of the genre etc. And then began thinking about the idea of salads and their eclecticism in relation to the nature of my work etc. but, essentially the main thought for the title was that I like big salads, and that just seemed like as good an alibi as any.”

All works will be for sale. A numbered catalogue will be produced to accompany the exhibition.