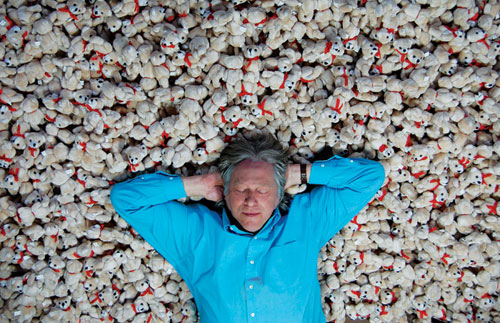 Just an idea…is a testament to the artist, entrepreneur and business maverick for whom no waking moment is complete without concocting new exciting ideas from run of the mill everyday norms or preconceived notions.Consisting of over 40 new works encompassing sculpture, photography, installation and video, as well as reprising some favourites from yesteryear (2011).

Employing even greater quantities and combinations of readymades demonstrate Miller’s ambition and determination to prise a reaction out of the viewer, be it by having to walk on a sea of teddy bears as one enters the gallery in Bear to tread, or a huge pile of cathode ray TVs, each showing only an isolated mouth shouting the word ‘rubbish’ over and over again in Rubbish.

Successful motifs from previous pieces are worked up into exciting new variants that attest to the maxim that sometimes bigger just is better. Neighbourhood Watch, previously a family of six ominous hoody wearing, mirrored faced sentries have procreated somewhat; Miller’s 2007 novel The Wookey Hole Affair is reinvented as Never Ending Story; the poem The Accident is reprised from Disjointed Noughts – his volume of poetry published in 2006 –and presented in a stark and moving film.

Happily straddling the line between stupid and clever, Miller’s work attests to his delight in working with wit, sarcasm and wordplay, offering a poignant reminder that there is no such thing as ‘no laughing matter’.